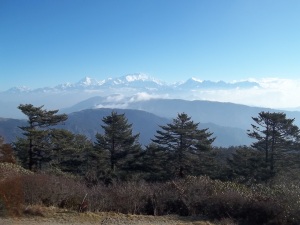 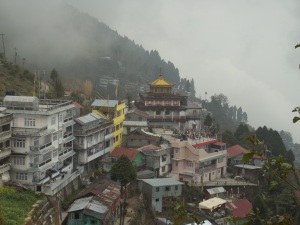 It could only be the British who could have thought that building a city, not just on a mountain but up it as well, was a really good idea. But that is just what they did with Darjeeling.

Of course, Sikkimese, Nepalis and Gurkhas at various times had lived on the mountains and hills before but never really in any substantial numbers.

But when the British decided it was a perfect spot for a holiday  – as well as an ideal place to make money producing the newly stolen tea plant from China- and built a road up it in 1840, the area rapidly expanded until, by 1857, there was a population of 10,000. Now that number is more that seven times that and the tea leaf is still being grown.

It was to go to this crazy idea of a place then that, after Kolkata, we re-packed our over-stuffed bags and lugged them to the station to catch an overnight train to Jalpaiguri. From there we got a jeep to Darjeeling– stuffed with 12 people in a vehicle made for 10. The driver drove sitting on only half of his seat. We were in the back with a full 360 degree view. Nice.

What I had not realised is that the British government based in Calcutta effectively ‘moved camp’ during the hut summer months from Calcutta to Darjeeling and I don’t blame them. Although Kolkata felt drier than the horribly humid Bangladesh, the heat was still just as intense. Here at LAMB we often refer to the heat as ‘the enemy’ and with good reason.

By contrast, the cool of the northern hills in Darjeeling was refreshing and very, very British. Too much so for me actually being forced to wear the jumper my wife insisted I would need because, annoyingly, she was right. The evenings were like an early spring night in Britain– nice for a while but just too damned chilly after a moment.

Nevertheless, if you can stomach the knuckle-clenching ride in a jeep up the road (I say road – collection of potholes might be more accurate) and don’t become violently sick looking over the foot of path beside your car down into the deep valley below (we had a 360 degree view of that remember), then Darjeeling has got to be one of the most beautiful places in the world and is well worth the loss of years to your life from the stress on your heart.

The mountains and valleys are breath-taking, the local culture (an interesting mix of Hindu and Buddhist life) fascinating, the people welcoming and friendly.

And then there was the Windamere Hotel.

Expensive, yet worth every single penny, The Windamere is an absolute institution recommended in every guide book and a must to be stayed at even if only, as we did, for a couple of nights.

Staying there, it is as if the British Raj never left. Though it is clear the staff are well looked after and the lady who runs the hotel clearly knows them and supports them, the emphasis on service for guests is such that you could believe you had gone back 100 years into the past. Nothing was too much trouble and if a staff member could figure what you might want before you asked for it, they would give it to you before you could utter a word.

The lady running the hotel – Elizabeth– was a character. Very friendly and aware of everything going on, she would greet us at the dinner table (five courses every meal) every day and chat with each and every guest for a few minutes. In the evenings she put on events such as having the local children perform traditional dances or showing a video in the mini-cinema at the hotel. This would be accompanied by a ‘hot toddy’ and, if outside, a bonfire to keep warm by as you enjoyed the spectacle.

But having afternoon high tea in the drawing room, in front of a log fire with scones and jam and cream was possibly the turning point of the surrealism that was attacking my mind. This could not have been further from what I had expected to see in India and I found myself doubting my values.

I have never been proud of how the British behaved as a whole in India during the Raj. Whilst there were, of course, some wonderful Brits there and we did some good things, on the whole, we took advantage of a nation for the purposes of our own greed and tried to cling on to that as long as we could. I have never approved of such a stance, though I know many a Brit who still does.

Yet there, with tea and scones, beautiful scenery and staff to meet every need, I realised that had I lived 100 years ago I would have been every bit a part of the regime. I found myself jealous of Darjeeling and wanted to possess it and keep it mine forever. These days that translates into a much more modest aim in the heart of a British tourist. That “We must come here again” feel. But I knew that secretly, deep down, for all my desire that all societies live free from fear and suffering I would not have resisted the lure to possess that, back then, gripped the English.

No wonder the British wanted to keep India. It is so very, very beautiful and its culture has not lost any magic in hundreds of years. What a pity that the West is, all too quickly, infecting it with cheap and easy values and this magic is in danger of disappearing. Almost a colonialism from afar really.

I returned to Bangladesh, glad to be back and me again with the Darjeeling drug out of my system, but also with a greater humility and a much deeper understanding of the frailty of human virtue – or at least of my own.