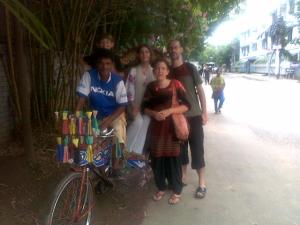 Rafiq is one of the 400,000 Rickshaw wallahs cycling people to and fro in Dhaka. He is Muslim, lives in a village with his wife and two boys and has a great sense of humour. He can be a bit grumpy in the mornings and is not, understandably, too fond of cycling in the rain. But he is well known as a trustworthy and friendly man who works hard for his customers.

He is also my friend.

Rafiq is no fool, he knows the areas where good customers will come (often Bideshis, foreigners) and he knows the kind of places they want to go to in the Gulshan-Banani areas and environ. This makes him well known in my community but it is not the way I came to know him.

I was introduced to him by a friend who, in effect, ‘hired’ him as her Rickshaw wallah. This worked really well for both of them. She would often have various places she needed to go to in a day and would use Rafiq to hang around to take her back and forth. Rafiq would get a generous payment from her guaranteeing, for that day at least, a solid income. My friend would pay more but she would get reliability, security and safety on the roads without all the hassle a white woman normally gets from wallahs who often want far more money than is the correct fare in an attempt to con more out of the uninitiated and rich bideshis who are in a position of weakness.

Throughout Dhaka the Rickshaw wallahs are reviled. They clog up the roads making it impossible for cars and lorries to get past, they go slowly preventing traffic from getting to and fro at a decent speed and some of them get lost, don’t know their way in certain areas or might even be in cahoots with thieves and robbers who do, regularly, mug richer-looking people and, especially, bideshis.

No wonder, then, there is an increasing campaign to get rid of the rickshaws or, at least, to hinder them and ‘cull’ their numbers. Increasingly, guards and police do not allow them to travel down certain roads or certain areas are made out of bounds during different times of the day with deliberately complex rules. The plan is succeeding, slowly. Some areas are becoming Rickshaw free.

And I believe it is an absolute disgrace.

It is disgraceful from an environmental point of view. It is not the rickshaws clogging the streets. It is the cars. If you got rid of the cars and only allowed buses, rickshaws and CNGs (motorised baby taxis) you would reduce noise and fuel pollution dramatically. The reason this is not a popular argument is that Gulshan and Banani are known as the richer areas ofDhakawhere the politicians and the influential people tend to live and work. They want their cars and they hate the rickshaws.

It is disgraceful from an economic point of view. Cull these men or reduce where the areas they can work and what will they do then? Most of them are unqualified and have little education – if any. What are they supposed to do? Where can they work? Instead, they actually help bring income into the city as they collect tens of thousands of taka every day and then spend it in the dokan  stalls on the street and other shops. They are a significant source of income for the city. What’s more, for a city that is trying to create a tourist industry (it is considered by some ratings as one of the worst cities to visit in the world), the Rickshaws and their drivers are, arguably, the most famous and colourful things to see in Dhaka. They give the city what little charm it has for most of the time.

It is disgusting from a moral point of view. It is the farmers, the factory workers, the day labourers and the rickshaw/CNG/vangari wallahs who probably work the hardest in the country for the least wages. No wonder some of them try to fleece bideshis who don’t know better. They would be fools not to try. They never know whether they will make a lot of taka in a day or hardly any. Either way, they tend to average out around the international poverty line of a dollar a day. This is no ‘Get rich’ scheme they have. They are not rich men. As it is, they cycle as many as 5 in a rickshaw in temperatures of 40 degrees or more never knowing if they will burn in the sun or get drenched in a sudden monsoon rain. To make their job harder just to please the rich and powerful is terrible and not what I have come to understand the Bangladesh people stand for. This is a country which knows more than most how important it is to look after the needs of a minority group. It has been in that situation itself twice in the last one hundred years – minority Muslims under the British and minority Bangla speakers under Pakistan. In both cases their cries were ignored because it pleased the rich and the powerful.

It is no different for the wallahs now.

Lastly, it is disgraceful from a personal point of view. Rafiq is my friend.

He often asks about our mutual friend who first introduced us. “Apa,” he says about her as his big sister, “she is a good woman but she works too hard. I worry about her. She needs a good husband.” Actually, I agree with him but that’s not the point. He knows her and what her life is like. He knows me and my family too and I am always asking after his. When I last saw him his wife was not well having just got over his youngest boy being ill. He had to pay for medicines he just could not afford and now his wife was going down. But “Insallah, God willing it will be okay” he says with a big grin. Nothing keeps him down for long.

But he gets angry about how he is treated by the police, guards and car drivers. He is no longer allowed in the area where our mutual friend lives because it is one of the areas to have forbidden rickshaws. This means she cannot use him generally any longer to both their disappointments. Still, when I see him he asks after her.

When I last rode with him I could not believe it when a driver in a very posh car literally drove straight through us. This was no high speed accident. He was turning a corner slowly and just pushed through us methodically and deliberately to get us out of the way. I had my 10 year old daughter with me at the time but the driver just did not care. Scary for us, but not the first time I have seen it happen. I’ve also seen rickshaws and their driver beaten with batons by police for no other reason than they were there. I saw one driver get out of his car and punch the wallah in front in the head because he was moving too slowly for him at a junction.

I want my friend Rafiq to be well, stay safe and be able to carry on his business without unnecessary hindrance. I would like all wallahs to be as honest and hard-working as he but, even without that, I think they should be allowed to make their way in life just as much as the next man. It is a lesson Bangladeshis know well and paid a great price to learn.

So let’s hear it for Rafiq and all the thousands of hardworking rickshaw wallahs like him. Long may they continue to bless, bewilder, annoy and amuse us in equal measure.

4 Responses to Rafiq The Wallah