It is with great pride and joy that I can announce to my special blog friends that our adopted daughter Elbina gave birth this morning (approximately 5:40am) to a healthy and beautiful baby girl. She doesn’t have a name yet – that tends to come later and Elbina has said I have to name her; I haven’t figured out if she’s joking or not! I suspect I don’t, in reality! But she does have a weight – 2.3kg.

We have been waiting for weeks for this baby to come. Elbina got married almost exactly a year ago and just before we left for the UK in July she told us the good news that she was pregnant. We thought it would be touch and go whether we would get back in time for the birth – we needn’t have worried! Babies seem to come into this world in much the same way Bangladeshis do other things – at their leisure!

What has been nice to see is that Elbina’s husband, Ibrahim, wanted a girl. In a society which tends to favour boys over girls – especially the first one – this is pleasing to see. I get the feeling (and I certainly hope and pray) that this little girl will get doted on.

Mind you, it’s doing nothing for the statistics if you count Elbina as still part of her birth village (she normally lives with her husband’s family now) – there is a plethora of girls in that village and hardly any boys at all!

Elbina originally was one of our ayahs but the relationship gradually changed as we all got on so well. She is full of life and energy, loved by my own two children and became a good friend to us all. When it came to finding a husband, I – along with her own father and other men in the village – had the task of vetting the young man and giving (or taking away) approval. It was at the point that I became considered to be her ‘father’. Santals have an even greater sense of collective identity than other Bangladeshis. 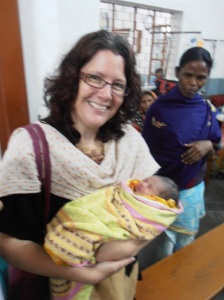 Whereas Bangla has a ‘Tumi’ and ‘apni’ for ‘you’ which are similar to the French ‘vous’ and ‘toi’ – they give different meanings for status – the Santals just have ‘am’. But when greeting a Santal you are more likely to ask not “how are you?” but “how are you all?” The family is considered to be the primary unit and you function entirely with that unit. It was a real privilege then, for my family and I to be adopted into the family unit and considered part of it. It’s a role I take seriously!

As you might guess, I am somewhat proud of being a ‘Granddad’ – even if it is fair number of years earlier than expected (my own daughter isn’t even twelve yet!). Looking at these photos though, I think I am fitting the role nicely. I’m so grey these days! How did that happen? 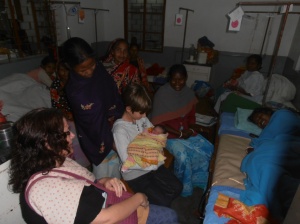