Interview with a teenager – Part III

Thank you for all the lovely comments about these interviews I’ve received both here on the blog, in private messages and on Facebook. It seems they’ve really taken your imagination. That’s good; these kids deserve the interest.

We looked at S last time. Today I want to tell you about the sole girl in this little foursome I chose. Her initial is P. 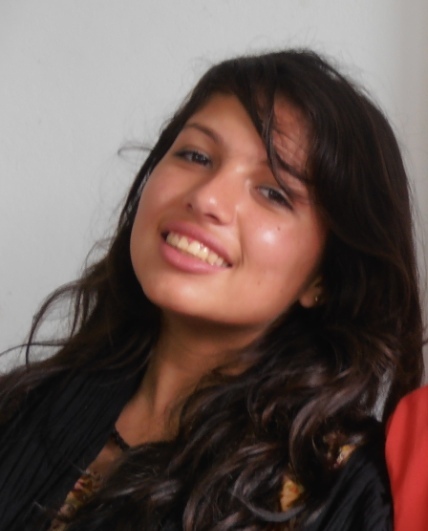 If I had to fight any of these four kids, P is not the one I would choose! She’s fiery, blunt and straight to the point – not a girl to mess with! She is so much fun to teach and I remember lessons with her with great fondness. The whole class were lively but she had a commanding presence somehow.

I’ve also always enjoyed the fact we live on a campus community and our school is still able to operate without all the phobias and paranoia that the paedophile-obsessed UK education system is riddled with. I loved being able to pop round to someone’s house to drop of a book or a DVD or something and not find the adults there but just these kids. I remember P and J distinctly.

“Uncle bhai,” they would shout from the table where they would be doing their homework together, “come and join us for cha!”

Well that’s an invitation I can’t refuse! Half an hour later and much laughter and silliness having passed and I would finally shove off and let them get back to their homework.

“Where have you been?” my wife would say when I got back. “You only went to drop off a book!”

Such was life at LAMB and still is to an extent.

P herself is a true “Third Culture Kid” (TCK). Her mother is American, her father Bangladeshi. Both parents are not just adorable but very cool too and they have passed those traits on to P. Her fire and sparkle though, I think are entirely from within, because her parents are the personification of peace itself.

Like S, P grew up at LAMB and only left when she reached the end of the education available at the time. She went on to the same school in India where S goes now but was the first of all of them to go there. She’s doing her A levels there and  I interviewed her while she was back at LAMB for the long summer holidays

When I asked P what it felt like to be back at LAMB the answer was typically blunt.

Then she thought about this and added, “though it is nice not to have anything to do. So it’s weird…”

The India school must be much better, I suggested – it’s larger, better resourced than LAMB’s little village school and so on.

“It’s cold, wet and rainy,” was P’s retort, “that’s like the UK, right?” she asked me. I shuddered my affirmative – I am not fond of those characteristics of my home country. P sees this as a good thing though; I have to remember she’s lived all her life in Bangladesh where the sun always shines – too much!

“It’s like a foreign bubble in India. And the school is much more Western, open and not traditional.”

She has a good point. LAMB works in a very poor and rural area often dealing with people who have never stepped outside their own villages their whole lives and never even seen a white person. Often these people don’t come to the hospital until they are close to death because then they have no choice. Education about nutrition and health care is a vital work carried out in the dozens of clinics we run out in the community but it means we have to make sure we’re very respectful of the community values and traditions. As much as possible, we make every concession we can to local culture. This is no bad thing – in fact Westerners need to learn more of this approach because we are terribly ignorant and rude wherever we go. But this has a knock-on effect with the kids here. P is clearly enjoying the chance to breathe.

“Everyone here feels everyone is watching them,” she says, “and friends talk about others so you know they are talking about you.”

It’s true. People love to gossip – whatever you go – but mud has a horrible habit of sticking on people here and never washing off. The protection that comes from a close-knit community can also be immensely claustrophobic.

So was there nothing good about LAMB school?

“Oh yes! I kinda really miss it,” P admits, “it was lots of fun in school. In the early days it didn’t feel like school at all. There was only about five of us in the class. At my Indian school now there are around 50 in a class!”

I wondered if so many in the classes meant that you didn’t get to make good friendships.

“No, everyone’s a friend. You have your close ones but people are so open.”

P went on to tell me how everyone can openly talk about their faith. You can live what you believe. It saddened me that she felt LAMB had lost much of the moral stance and love it had once shown. I don’t believe it is as bad as she feels but I do think she has a point.

We were getting heavy so I got us back to the important stuff:  Is the work at her Indian school harder or easier than at LAMB?

“When I first came I had nothing to do,” she says in complete contrast to what S had to say about this same point.  “But then,” she adds with a grimace on her face I remember well from when I used to give her homework, “the mock exams began and I had to do loads.”

P is a bright kid who confesses that Maths at A level is “really cool.” She’s no nerd though and loves to ‘hang out’.

“At school we have about 4 hours a day of nothing to do but actually we always find something – reading, chatting, cooking, watching football…”

I can just picture P doing this; it was no different when she was at LAMB!

I asked her if she would ever come back to LAMB to live.

Her last words were difficult to hear:

I have to remember that P grew up here and over just my 6 years of coming to work with LAMB I have seen the place change a great deal – always expanding and doing more. P must have seen even more in 17 years! The things she loved most about here are the things that brought my family and I here to live 4 years ago. I have to remember that her memories as a child may not be the whole story. Nevertheless, her comment is a worry I have always shared as LAMB talks more about ‘policy’ and less about ‘people’. I’m sure it will swing back one day but it is difficult to get the balance right. My feeling though, has always been that kids have their fingers on the pulse. That’s why I think giving them voice – like these interviews – is so important.

But enough about LAMB: it’s time to say goodbye to P. 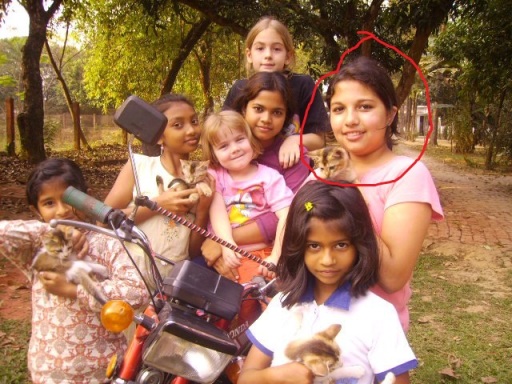 From several years ago (P ringed). All the girls here were LAMB girls though every single one has now moved on…I feel old… 😦

She is a remarkable girl: Intelligent, yet very cool; fiery, yet so much fun to be around; attractive without being full of herself. I don’t think she is yet completely aware how much influence she has over people. I’m not sure she ever will. P is one of those who just ‘hangs with the guys’ and is content to almost loiter her way through life, disguising her sharp senses and keen intelligence. I think she is set up to be and do anything she wants to in life and I know her parents will support her fully in her decisions (although I may now get told off by her mom for saying that!). In truth, I’m a little jealous of P. She leads a charmed life – but deserves every bit of it.

However:  Don’t ever, ever get into a fight with her. You’ll lose. 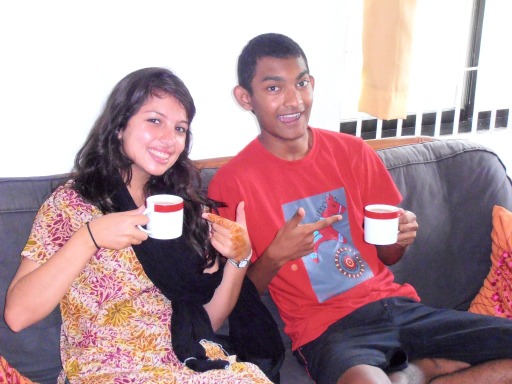 P and S with cha in hand – just like old times!

11 Responses to Interview with a teenager – Part III