Today is the second instalment of this epic tale. If you missed the first one read it now here.

The next day we went back to the LAMB hospital for more tests including another echo. The stomach pains had gone and seemingly so had the kidney stone (if it was ever there – I’m still not convinced it wasn’t just wind). However, my Hepatic vein from the liver was a little enlarged and this, along with the chest pains was enough to make Dr Nice nervous that something was going wrong with the heart. 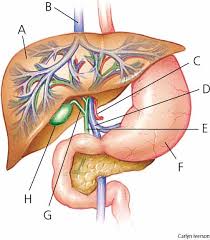 The Hepatic vein – it’s one of these. Apparently.

“I’m worried about heart disease,” he said. I groaned inside and looked at Wifey to confirm my suspicions. Just as I thought, she looked like someone had hit her with a brick.

That’s done it. I won’t get any peace now.

I was right. Wifey now refused to let me do much at all (except, oddly, the washing up). I was given new medicines to try out but the side-effect is lowered blood pressure. As my blood pressure is already very low (it used to be on the floor as a youth but has got a little higher as the years have gone on) I was told to take three days off school so I didn’t collapse in a heap in my History class and become, effectively, part of said history. This was not pleasing news considering I was already way behind with lessons because of the time taken off so far. I didn’t need another three days missing.

I became happier with the thought that at least I could get on with doing some writing and catching up with emails. I always like to see a silver lining.

Wifey, however, was not happy and was now very stressed about me. It took two days for her to have had enough and go back to Dr Nice and discuss the situation. The joys of working in a foreign country, in a health NGO where your wife is one of the team: Western rules of professional confidentiality kinda get quite bent really.

The result was that this afternoon I got summoned to back to the hospital, this time for the ultimate test. They wanted to get me on the exercise bike and monitor my heart rate and blood pressure and to test me once they’d induced the dreaded chest pains. The plan, I think, was that once I was having the pains they could see what was actually going on inside. Good idea.

This is not going to be fun, I thought. I was right – again. Well, partially right. I thought my Wifey might die laughing, as it happened, in the end…

Only the pie in the face was missing

We arrived at the hospital and I was quickly ushered into the room with all the echocardiogram equipment and stuff. I knew this room well now; I’d been there many times in recent weeks. The exercise bike was actually being borrowed from Wifey’s Rehab department and she had given instructions for it to be delivered to the echo room.

Except it wasn’t there.

An Ealing comedy, not LAMB. Normally, the differences are obvious.

What happened over the next 10 minutes I can only describe as akin to a British Ealing farce. It was hilarious to watch from my position which was now shirt off and lying on the bed and waiting.

There are two doors to that room and both were used extensively during that time. Dr Smiley was going to take my pulse and blood pressure, Dr Nice was going to use the computer equipment to do the Echo tests. Wifey was going to write down results on my medical notes; but first she had to find out where the flippin’ exercise bike had gone.

This was pretty much like the bike except the seat is at the wrong angle here.

Wifey went out of one door and Dr Smiley came in through the other. She then left as Wifey returned through first door. No bike? No, but Dr Nice now needed Dr Smiley. I’ll get her says Wifey and leaves through same door. Instantly Dr Smiley comes in through second door. First door opens and a strange man brings in what can only be called the prototype to what the bicycle could possibly have ended up looking like had a madman invented it. He left again. Dr Smiley left again. Wifey returned. Ah, here was the bike – it had ended up in Maternity for some reason. But no Dr Smiley…this continued, Doors banged, one after the other and it was like watching a British comedy play on the stage. I nearly shouted out “She’s behind you!” but resisted the urge. I figured the chances of either Nice or Smiley shouting back “Oh no she isn’t!” was slim to nil. I’m sure you get the picture. I was amused.

What followed after that was far from amusing. At least, it wasn’t amusing for me.

Part III of this epic story will be posted tomorrow. Today’s was deliberately short because tomorrow’s will be longer. So plan it into your day: choose a comfy chair, get a nice hot drink and be ready to settle down with your favourite electronic device and read the less than ‘chilling’ conclusion to my sorry tale.