Back in Bangladesh and Ready to Write

So, I’m finally back at my desk sipping my cha, looking over very green fields and enjoying the breeze from the ceiling fan now very much needed in Bangladesh. Yes, I’m back with my people, my family, my friends at LAMB after far too long away.

Thing I and I went back to the UK in part for a wedding. I’ll tell you about (and show you photos from) the wedding in a later blog post but for now I’ll say the wedding was very wonderful, the bride beautiful and weather freezing. I really don’t do British weather. Here’s a pic to keep you going for now: 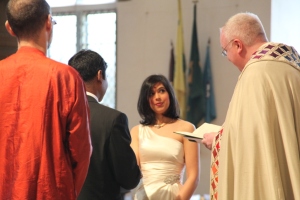 One of my favourites

Believe it or not, I wasn’t on a step but the vicar was. Seriously, it must be a camera thing – I’m just not that tall…

I’ve come back to a country that is still fighting with itself. People are still dying; the Jamaat e Islami are continuing to cause problems; The BNP are continuing to call for hartals and the ruling Awami League party continue to do whatever it is they deem best – which seems to be very little currently as every move is a potential vote loser and with elections only months away probably they don’t seem to want to do anything other than try as many war criminals as possible. This would be fine if the people could believe it was for any other reason other than to win back lost votes.

But, as many blogs have pointed out in recent times, when the BNP were in power and the AL were the opposition, not much was different. I sometimes despair to think that in one hundred years from now, Bangladesh might not have changed in this respect at all. I so hope that is just the small voice of pessimism in me and proves to be wrong.

Nevertheless, I’d still rather be here than the UK.

Anyway, as I was coming back into the country and back to LAMB some interesting developments took place in my life. One of them I can’t go on about too much right now. We’re playing it close to our chests for now. The other I can say a little more about. Both are about writing.

The first is that the dim possibility of a regular writing and possibly travelling gig might be on the cards next year. As regular readers know, Wifey, Thing I, Thing II and my good self are leaving Bangladesh at the end of the year. We have little planned so far apart from going full-time as a freelance writer from this June onwards to prepare enough contacts so next year I can put food on the table through the written word. A ‘chance’ conversation recently has put the possibility of a regular gig my way. Early days, don’t really know what it truly entails and if it is something we, as a family, really want but we’re looking into it. I’ll tell you more if anything comes of it eventually.

The second is more immediately exciting.

Remember I had made contact with a publisher who took my two book manuscripts to consider for publication? I’m pleased to announced that after going through a committee of about seven writers who advise the publisher on publishable merit he has decided to publish the novel I wrote last year during JulNoWriMo. I am just a little bit pleased about this!

There is still one more hurdle to go through, however, before the process of getting the book in your hands can begin (you are going to buy the book, aren’t you? 😛 ).

This is where I find out if the publisher and his team – who seem absolutely lovely and have been very welcoming to me – are as genuine as they appear. I have a stack of books they’ve published which are all good quality, some of the writers for the company are very important names too.

It all looks good.

It could all go terribly wrong.

But (and this is a big but) it IS still a huge step forward. I’ve got something in book form that is now demonstrably publishable and even if things fall through, I can go on with greater confidence. It would, of course, be nice to get the novel published however, rather than have to start all over again.

We’ll see, but time doesn’t stand still even for the news of having a manuscript accepted! For a start off, there’s this year’s JulNoWriMo which Thing I and I so enjoyed doing last year. This year we’ve got a joint venture in mind – a father and daughter novel written as a series of letters from one to the other and loosely based on the experiences of three generations of my own family and our lives spread between India, Britain and Bangladesh. So far, it’s a good idea but we have yet to firm up the plotline or it will remain as nothing but a nice idea!

I also need to catch up with some blogs I’ve been trying to write for ages. One in particular is the strange but true story of what happens when a beautiful Swedish girl you’ve never met asks to come over for a visit just as Bangladesh becomes embroiled in violence. A recipe for disaster? You’ll have to wait and see. I can think of at least one blogging reader who has a vest interest in reading that post when it arrives. But Rinth – no telling what’s coming, ok? 😉

The groom and his dashing Best Man!

24 Responses to Back in Bangladesh and Ready to Write