On joining the biggest clique in the world

So, two days ago I finally relented and I did it: I joined Twitter.

I didn’t intend to. It was actually my daughter, Thing I who wanted to join. She bounced in front of me like a bunny rabbit on smack demanding to be allowed to join and I knew I couldn’t get away with a gruff “no, now bugger orff.”

So I gave her a challenge that I knew would put her off. “If you write me a 500-word essay on why should have Twitter while I’m away in Dhaka, I’ll read it when I get back and decide if the reasons you give are good enough.”

The bunny stopped bouncing but grim determination spread on her face instead. It wasn’t quite what I expected to see.

“Twenty years ago, being followed by one hundred beautiful women would either lead to divorce or Police protection”

That was last week.

When I returned I had a laptop screen thrust rudely in my face. “Read it,” she hissed. The Bouncing bunny was now more like the killer bunny from Monty Python. I felt like screaming “run away! Run away!” but instead I sat down to read the essay Thing I had, annoyingly, managed to put together quite successfully.

Darn me if it wasn’t a good piece of writing with fair to bloody good points raised within.

What’s more, some of the points – about being able to publicise her blog further afield and concentrate on a more targeted audience made a lot of sense for me too. I’ve had several writing friends suggest/advise that Twitter is an essential tool for writers to use but I really didn’t want to have yet another social media tool to have to manage. It’s reached a point where managing Facebook, Google+, LinkedIn, WordPress,  AND the hundreds of emails I get each day is close to becoming a full-time job. There isn’t actually any time left for writing!

And yet, after reading Thing I’s essay, I was ready to relent, give in, confess my sins and repent. I still wanted to stop my disturbingly precocious child from getting it though so I said “Right I tell you what – I’ll put myself on Twitter first just to check out whether I think it is safe for you to use and if I think it is then I will let you join.” The bunny didn’t exactly bounce with that news but she did, at least, look less like tearing my throat out and was, in that sense, pacified.

I figured I would look at Twitter, find it is everything I thought it would be and instantly cancel my membership. I could then tell bunny-beast that it was no good after all.

The plan didn’t work out quite as I planned.

So I joined Twitter but what I didn’t expect was that as soon as I announced my presence on the stage I was instantly joined by about one hundred followers – most of whom I have no idea who they are. Actually, most of them are also rather attractive-looking women and I mused on how different the world is today. Twenty years ago, being followed by around one hundred beautiful women would either lead to divorce or Police protection depending on the likelihood of a Fatal Attraction situation arising. Now, they’re mostly legitimate and professional from what I can tell: writers, editors, authors – not a psycho amongst the lot of ’em. It’s a strange world.

From the messages I received from friends it became clear I had joined the world’s largest clique. “Finally,” the messages said to me, “you’ve joined us. Welcome Brother; come inside to meet the family”. It was just a bit scary -but seductive too. I felt all warm and fuzzy inside. All hail Twitter, I repeated to myself as a mantra.

“I have just done my first Twit!”

So, here I am a couple of days later with numerous tweets to my name already and not one of them yet actually to do with writing. That will come, I’m sure but for now I’m  learning how to use the thing.

For instance, I still haven’t figured out what a ‘favorite’ is, what most of the symbols on my phone Twitter app means or how I go find myself really useful friends to follow – like editors, publishers and agents, for instance. And how do you recommend people to follow?

Even the terminology has left me confused. I reduced my daughter and her mother to tears of laughter when I announced, with pride that “I have just done my first Twit!” It would appear the appropriate word to use was “Tweet”. Well, just how was I supposed to know?

Anyway, Thing I got her way in the end.

I had so much fun with Twitter I couldn’t then tell her she wasn’t allowed to have it. Now both of us twit or tweet or whatever the hell it is we do and the race appears to be on for just who can gain the most number of followers first. So far I’m well in the league (which I put down to my dashing good looks, bien sur) but I suspect that sooner or later the writer known as Amory Powell will soon overtake me if for no other reason than because she knows how to operate the damned thing.

What Twitter should mean though is that I can start to ‘retweet’ (see, I am learning) some of the good writing advice I come across regularly from all the sources I use which have helped my writing career (in its infancy though it is) immensely. The Blog, though it discusses my life as a writer, isn’t really the place for such writing advice and I’m not so vain as to think I have anything to offer of my own for aspiring writers (being one myself) but I do know a lot of people who do know what they are talking about.

I can see Twitter being useful for that as well as being good for promotion when the novel comes out. So here’s hoping that Twitter doesn’t prove to be yet another social media stone to drag me still further into the depths of ‘busyness’ but turns out to be the helpful media tool everyone has promised it will be. Let there be many publishers, editors and (right now, most important) agents who end up on that ‘Following’ list ready to be wowed by my incredible writing skills, my wit and, of course, my good looks.

And may my bunny always bounce. 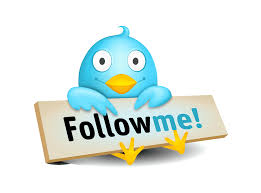 For those of you who would like it after all that rambling nonsense, here is my Twitter address: @KenFordPowell

9 Responses to On joining the biggest clique in the world