Our Final Pohela Boishakh – Bangladesh Culture at its best

It’s been a few weeks since Bangladesh celebrated its new year but I wanted to give you a little photo tour of how we celebrated it at LAMB and also a little bit of the history behind the national celebration.

It’s all a little confusing how Pohela Boishakh began and records or shaky but most authorities seem to agree it was probably the Muslim emperor Akbar who instituted the idea of the modern-day new year’s day for Bengal. The date is a subtle combination of the Islamic lunar year and the Bengali solar year. While city dwellers and governments happily used the Julian calendar, the rural people (then, as now, in the majority) tended to base their year on the harvest cycle of the land instead.

The problem was, in Akbar’s time, this meant the collection of taxes didn’t fall during the crop harvest and so many poor people suffered unnecessarily. The re-institution of Nobo Borsho (new year) at the beginning of the Boishakh month (around mid-April) when the crops are traditionally harvested meant taxes could be collected at an opportune time. The idea proved popular with the people.

Traditionally, singing, processions, and fairs mark the day; businesses start this day with a new ledger and clear the old. One of the great things about this festival is that it doesn’t matter what your religion or status is. All people from all walks of life celebrate this time reflecting on the simpler, rural roots of Bangladesh.

At LAMB, we begin by meeting on the school field where later on the fair and onusthan (celebration) will take place. The tradition is to wear red and white – especially the ladies who always look incredibly beautiful for the occasion. The party begins when the hired band strikes up. We march, sing, dance through the whole compound before then heading out on to the streets, celebrating all the way down to our nearest village compound where a period of frenzied dancing takes place before we all head back to LAMB school’s field to continue dancing.

After that comes the traditional ‘wet’ fish curry, as everyone lines up to get their plate of curry and eats open-air around the field. This year, though, my family and I went to the home of some friends to eat instead so we missed much of it. In the afternoon the stalls open up for business and soon after the concert programme begins.

This year saw some amazing talent. Alas, my sitar rendition of Raga Bilabo was rather weak as it was far too hot and the instrument continually lost its tuning. I managed but if, in future, I play again it will be at the end of the concert as the sun goes down!

I was more than outclassed though, by Japanese music played beautifully by an oriental visitor and by the girlfriend of Thing I who is also one of my students. She and another girl played tampuras and sang a traditional song which is part-improvised. I can’t describe how electrifying their performance was but the singing was impressively skilful  I sat transfixed as I listened to these very young girls making professional quality music. In a country where girls are often treated as second-class, I get especially excited when intelligent, beautiful and artistically skilled girls are able to flourish. LAMB abounds in them. 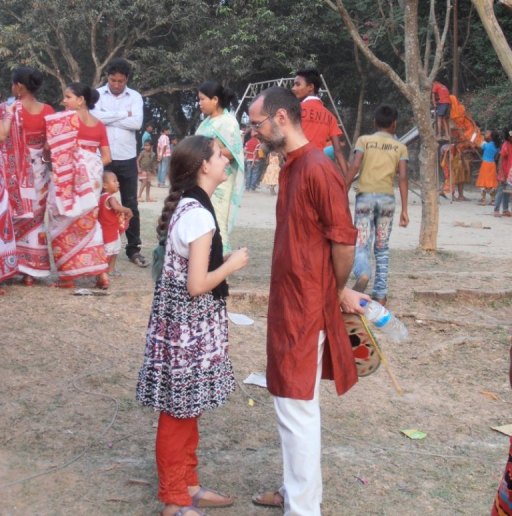 A ‘father-daughter’ moment during the Bengali New Year

A good time, as always, was had by all but it is with great sadness I report on the event because, as regular readers know, this is my last one. I will miss events like this, especially considering the recent garment factory tragedy and violent events in the country, because they remind me that Bangladesh is – first and foremost – a land of great beauty, culture, art and music. A land to be treasured and valued. I’m so glad that this year’s Pohela Boishakh reminded me so perfectly of this. I am truly grateful.