An odd and ancient English tradition

There is nothing quite like a pub in England. I hadn’t realised this before jet-setting around the world but it’s nothing like the bars of the Mediterranean or North America. A pint (or, these days, maybe a juice) in an English pub is essential for any visitor to these shores at least once in their lifetime and no pubs are better than village ones such as those you find in St Bees.

As an Englishman, I assumed a quiet pint down the pub was relatively safe on Christmas Eve but I was wrong. I didn’t expect an invasion from  five strangely clad locals who barged into a tiny lounge, the first of whom bellowed the following:

Silence, brave gentlemen : if you will give an Eye,
Alexander is my name, I sing a tragedy;
A ramble here I took, the country for to see,
Three Actors here I have brought so far from Italy;
The first I do present, he is a noble king,
He’s just come from the wars, good tidings he doth bring.
The next that doth come in, he is a doctor good,
Had it not been for him, I’d surely lost my blood.
Old Dives is the next, a miser you may see,
Who by lending of his gold, has come to poverty.
So, gentlemen, you see our actors will go round,
Stand off a little while, more pastime will be found.

Little did I realise that we were now the captive audience of the St Bees Mummers who were enacting a short play which dates back to the nineteenth century – at least in terms of performance in Cumbria – though the tradition of mummers performing folk plays (usually around Christmas or New Year) goes back to the Middle Ages. 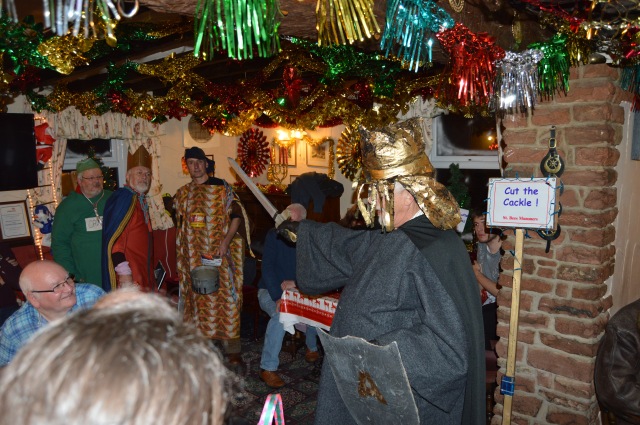 It was all rather like watching Monty Python, in the best possible way of course, as these five men threatened male customers with their wooden swords and flirted outrageously with the women – all in the name of good fun, I hasten to add – and, for ten minutes or so, regaled all with an outrageous story of a hero, killed by a baddy only to be raised up by a good doctor (worryingly called Dr Crippen) and then to vanquish the bad guy as happens in all good stories.

One of the rogues hotfooting it to another pub.

Then, as swiftly as they came, they went again (after collecting money for a good cause) to move on to another pub down the road. Within an hour or so they had collected donations from all the pubs in St Bees and removed their disguises so they could mingle with the crowds and resume their legitimate occupations – such as bell ringing for the local church just minutes later in time for the Christmas Eve midnight service.

Will these rogues ever be discovered, caught and sent to the gallows to hang for their crimes? I doubt it though I suspect their identities are not hard to discern for locals. Clearly they are in cahoots with the law as these men perform the same play every year in St Bees on Christmas Eve and have done since at least the Eighties.

The rogues at large

There was a time, back in the 1800s when you would have found mummers in most English towns performing outlandish plays, usually comic, dealing with good versus evil and inevitably seeing the hero killed and resurrected by a quack doctor before proceeding to finish off the villain.

The origins of the term ‘mummer’ is not clear. Possibly from the High German, mummer, which means ‘disguised person’ which in itself comes from the Greek, mommo, ‘mask’. It could come from the Middle English mum, to keep silent – which is still in our vocabulary when we ask a confidante to ‘keep mum’ or say ‘mum’s the word’. Personally, I think all these terms have a common origin in the idea of keeping something secret – whether verbally or physically. Certainly, for mummers today (the tradition, though it died out, has been brought back to England not just in St Bees but in many other towns though nowhere near as popular as it once was) the importance of dressing up for the role is important, albeit quirky to say the least.

The script is pretty much as it was in the nineteenth century in neighbouring Whitehaven  when published by Callander & Dixon (1847-1891) though the traditional end – which introduces Beelzebub, a new character, to give a final monologue – was dropped. It was felt that the experience for merry pub-goers was bewildering enough without introducing the devil, even if he is a frequent character in these mock plays. Instead, this little ditty finishes the play:

Our Christmas play is an at end
But before our homeward way we wend.
We’re going to pass around with this ‘ere tin
And we’d be very grateful if you’d put something in.
It’s money we want, it’s money we crave,
To help Britain’s lifeboats some more lives to save. 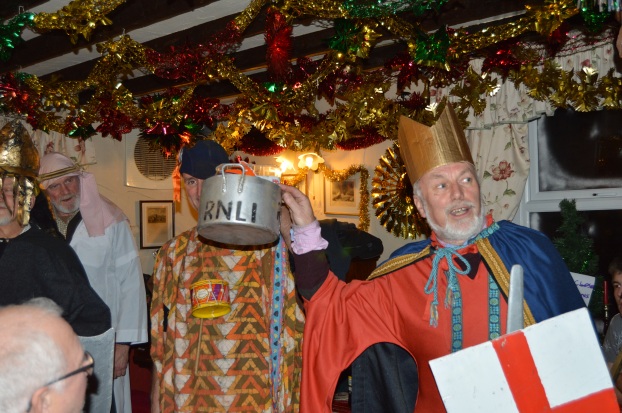 Please give generously…or lose your head!

Yes indeed, there is a purpose to the madness of these fine gentlemen and that is one of saving lives rather than ending them by the sword. St Bees has its own RNLI lifeboat station and, unfortunately, it is called upon all too often with these choppy shores. From what I observed that night, the locals are not complacent about supporting this important work and gave generously. Or maybe they just feared the kiss of death from the bad guy’s sword…and what Dr Crippen might do to save them…?

5 Responses to An odd and ancient English tradition