The danger of tolerance in a prejudiced society

In my TEDx talk on the importance of the Global Village, I begin by discussing my own prejudices against the common Asian dress for men called a ‘lungi’ and questioning the audience about their own prejudice. 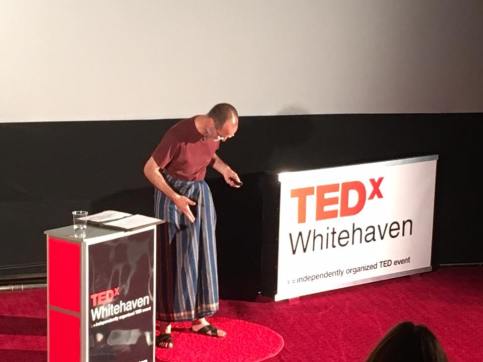 Who did THIS to me?! (photo: Andrew Bernie Bernard)

Of course, most of the people there would have been amused by my ‘skirt’ rather than outraged and indeed while living in Bangladesh I found the idea amusing myself. The only ‘darker’ emotion was the suggestion that I might wear one myself. When suggested it would invariably result in raised eyebrows and a definite “not if my life depended on it!” Looking back now, knowing as I do that I did relent in the end, I find it interesting to question why the thought was so borderline repulsive to me.

We’re all products of our own societies and cultures and that means we come with the baggage of prejudice. I’m looking forward to seeing a play soon called ‘Bangla Brummies’ soon which looks at prejudice from the point of view of Bangladeshis living in Birmingham, UK. The prejudice is both aimed at Bangladeshis and is also found within them. I like such honesty and it is something much needed in the world today. We’re all very good at being critical of others but not so good at being critical of ourselves.

Life has changed a great deal for me over the years. When I grew up in the 70s it was okay to be homophobic, racist and consider anyone who didn’t live according to what was considered decent British lifestyles to be deviant and potentially immoral. The opposite is true today. We all have the right to live whatever lifestyles we like as long as we don’t break any laws and don’t cause any direct harm to others. This is a good thing, right?

Yes, obviously, I think it is on the whole but there is one caveat: making prejudice socially unacceptable doesn’t mean prejudice isn’t growing. This is a very real danger I don’t think we’re taking seriously yet and we need to rather urgently.

While the Brexit debate was growing, before the referendum took place, British social media was awash with opinion. On the whole, the ‘remainers’ like me talked of the prejudice against foreigners and the fear that leaving would give the floor to racists. I personally was knocked back (entirely, I have to say, but white middle-class people) again and again by those who were insistent that Britain really isn’t racist but has a history of embracing people from other cultures and is one of the most tolerant nations in the world. It’s easy to say when you’re not the one being targeted time and again.

I remain convinced that the cheery ‘welcoming Britain’ myth isn’t true because it flies in the face of human nature. We all have a tendency to be scared of people who are different to us and Britain has fuelled such fear for centuries. But if you don’t allow voice to these feelings, the anger and fear builds up until you have a dangerous situation. When a crack in the dam appears, all hell is let loose.

We’ve had many cracks in recent months and years. Every time there is a terrorist attack (and only the ones by Islamic extremists are highlighted by the media) we see a violent reaction against innocent targets. When Britain voted to leave the EU there was an immediate reaction against foreigners or those perceived to live according to foreign customs. Today we’re living in a world where prejudice has suddenly gained acceptability again. In a few days time the American public will be voting to potentially promote a violent misogynistic racist to the Whitehouse. There shouldn’t be any competition at this point. Actually no, there should never have been any competition at all from the beginning as my article here pointed out. Yet, though Trump shouldn’t stand a chance, it is neck and neck. Even though he is still unlikely to win, the damage is done: enough Americans think he’s right and that is very, very scary.

I’d love, at this point, to tell you what the answer is but if I’m honest I feel very defeated by humanity at the moment. Like I say, we all have our own prejudices and I’m well aware of mine. We live in a grey world but one which likes to judge others according to the rules of ‘black and white’. My preference has always been to speak from weakness. It’s no coincidence nor attempt at insincerity on my part that my TEDx talk is honest about my own fears and prejudices. I’ve always tried to be honest about the things I know are less than good about me rather than attack another for the things which are less then good about them. I’m happy to criticise societies, cultures, governments and policies but it is rare you’ll see me rant against another human being – but believe me I could! I prefer to rant against myself instead.

Ironically, I’ve been criticised for such honesty and many a time I’ve been misunderstood for it but I can’t help but feel like I wished more people would be the same. Living in a blame culture is tiring – when you’re already very aware of your faults, having to justify them to others constantly is just draining. One great characteristic of the British is that we apologise even when it isn’t our fault. Someone bumps into us and the first thing we say is “Oops, so sorry!” I’d love to see more of that in a sincere form universally applied. What a world we could live in if everyone said “I’m so sorry” instead of “You say sorry right now!”

28 Responses to The danger of tolerance in a prejudiced society