My daughter came back from a camp for TCKs (Third Culture Kids) today. She loved the time away and made important new and special friendships with other teenagers who know just what it is to live in your ‘passport country’ which is simply an alien world to you.

She made a reference to a bit of wisdom she learned there which used the metaphor of ‘monsters’. It got me thinking and led to this post – even though it breaks one of my normal ‘rules’ for this blog.

I remember – back when I was very young – how I used to hide under blanket at night so that there was just a little peep-hole to look out of but otherwise my entire body remained safely inside the cover of the blanket because that way the monsters can’t get you.

It was a bizarre logic looking back on it now. If there really was a monster in the room there’s no way a blanket would protect a small boy! But, somehow, I ‘knew’ that blanket would protect me from all monsters. It was a magic blanket and, as long as no part of my body was peeping out, I was safe.

I’ve mentioned my strange childhood behaviour to many people and  was astonished that all over the world people have, more often than not, said to me “no way – me too!” Is there some kind of strange instinct left over from cave-dwelling times that makes most of us have some version of the ‘monster blanket’? It seems to cross all sorts of cultures and traditions. It’s a weird thought.

However not too many, I suspect, will have an experience similar to mine (though maybe I’ll be surprised yet again?):

It was a dark and stormy night 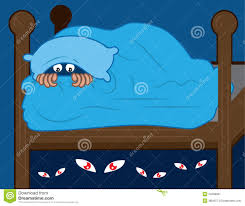 Well maybe not stormy – but it was a cold dark winter’s night I took a hot water bottle to bed with me and, after reading a good book for some time, I turned off my bedside light (which was on the floor for some reason) and settled under my blanket making the obligatory peep-hole so I could see out in the darkness in case any monsters did come. I drifted off to sleep.

At some point much later I jerked awake. I had been disturbed by something and I was suddenly alert.

And now I knew that it wasn’t my mother (who would sometimes check on me during the night and very occasionally might turn the light on if she needed to ask me something that couldn’t wait until morning). She wouldn’t take that long to move or say something. There was only one possible explanation:

A monster was in the room.

This was it. This was the test of my faith in my magic blanket. Would it protect me after all or would I soon find the blanket flung off me before some vile creature feasted on me in a most terrible way to die? I clung to the blanket barely daring to breathe and not moving an inch.

I have no idea how long I waited for the end but it felt like hours. It must have been at least half an hour I guess. But eventually terror gave way to puzzlement. Nothing was happening. Death didn’t come.

Then I asked myself a key question:

It took time to figure it all out but what must have happened was that in my sleep I had jerked violently and kicked the bed-warmer out of bed. It had landed on the switch of my bedside light (on the floor remember?) and turned the light on. My terror had all been in vain. There was no monster – just me lurching around in bed.

To be fair though, the blanket didn’t let me down.

Monsters in our lives

This came back to me when Thing I told me all about ‘monsters in our lives’ and God being bigger than any of them.

We do get monsters in our lives sometimes and they can threaten to devour us. I’m dealing with one now. It’s huge and threatens a ‘death most foul’ in more ways than one. I feel like the small boy again but now I’m groping around in the dark for my blanket to cover myself before the monster can get to me and kicking myself for leaving the door open so it could get in at all.

I don’t normally write about belief in God in this blog but for many of us that blanket is the belief in a supernatural and loving supreme being. If that supreme being is truly worth trusting then we have to believe he is like a ‘monster blanket’ covering us to protect us from the monsters we might face.

I’m trying to find my blanket right now but it feels somewhat like most of it slid off the bed during the night while I slept (for the last six months). I hope I do find it because I think its magic protective powers are about to be tested, just as they were all those years ago.

3 Responses to The Monster Blanket